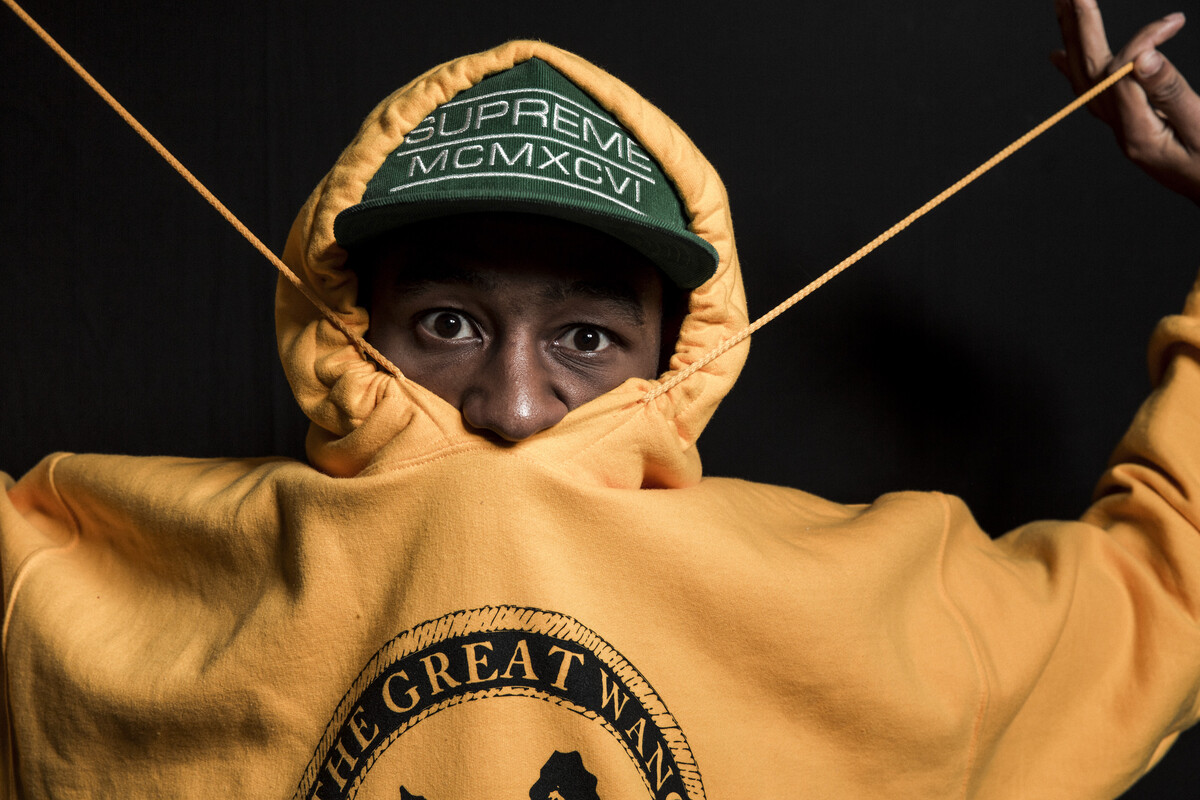 Tyler, the Creator: The Interesting Hip Hop Life of a Humble Star

You either have the charisma or you don’t. All other skills can be learned or practiced at any time as they are not natural.

However, charisma, or the attraction that an artist exudes, causing their audience to be drawn to them like a magnet, is something that no school or institution can teach you.

Tyler, the Creator, our hero for today, is a fantastic example of what we are talking about. But, who’s Tyler the Creator?

It is possible that dozens of names will come to mind when we think about captivating new-school musicians. The fact is that no one has been as successful as Tyler in utilizing this weapon to his advantage and making it into one of his most valuable allies. His popularity can be witnessed by the demand for many tickets for all Tyler the Creator concerts, that are always sold quickly.

Tyler, the Creator, however, possesses a number of other characteristics that distinguish him as one of the most representative, anarchic, and intelligent musicians of his generation. There’s a lot more to it than that. To learn more about him, we invite you to continue reading.

It’s not an easy thing to answer who’s Tyler the Creator, but let’s start from the beginning. Tyler Gregory Okonma was born in Hawthorne, a southern suburb of Los Angeles. His childhood and youth years were distinguished by school roaming and other trouble (he went through 12 schools in 12 years).

He Never Got to Know His Father

A painful break in anyone’s life, since not knowing your father is a very major setback in life for many individuals, as it requires more than one parent to truly balance the responsibility of raising a child.

At the Age of 14, Tyler Taught Himself to Play the Piano

Incredibly gifted individuals who can teach themselves to play an instrument are able to earn the right to be referred to as one of the best when they reach that level and continue to show an interest in performing in front of others.

His Social Media Presence Is Massive

If you check the Tyler the Creator Instagram profile, you’ll see that he has millions of followers who are eager to keep up with his progress and observe how his career is progressing. Obviously, his status as a musician and a celebrity has elevated him to the level of a person that people want to learn more about.

Tyler the Creator lyrics have been roundly criticized for his usage of homophobic and cruel lyrics directed at women, but he has always defended himself by claiming that his lyrics should not be taken seriously, claiming that he is only singing a song and not being serious about it.

Back in the day, gangster rap was plagued by the same issues, which finally led to its demise as well. His responses are not particularly insightful or helpful, but, like everyone else, he has the right to express himself freely.

His Net Worth Is Around $6 Million

He’s definitely had a successful start to his professional life, and he has a large number of people who are willing to pay a lot of money to see and hear him, which indicates that he is doing something right.

He’s also probably made a few smart investments here and there to ensure that his fortune doesn’t vanish into the air.

He Was Banned from the UK for A Number of Years

The fact that the album that prompted the ban was one he had previously toured within the United Kingdom created a significant difficulty for him. He came to believe that being banned in the United Kingdom meant that parents didn’t want their children to look up to a black guy.

However, there are some who believe he may have done or said something else that contributed to his expulsion that disagrees with this viewpoint, which has been going on for some time and can be contested.

Apart from that, if the incident were to have been racist in nature, other non-white artists would have been denied the opportunity to perform in the United Kingdom during that period as well.

He Is An Atheist

The fact that some celebrities are believers and others are not is interesting because it is a matter of personal choice, even though it can be debated whether religion is essential or not, and sometimes it is, because it is a sensitive topic among individuals, whether or not they believe in anything.

He Founded An Alternative Hip-Hop Collective

Tyler created Odd Future Wolf Gang Kill Them All in 2006, which is also known as OFWGKTA.

The original concept was to bring together a diverse group of alternative hip hop artists who were all interested in pushing the envelope with live shows that looked like something out of a punk tour, complete with moshpits, rappers throwing themselves into the crowd from the stage, and creating chaos by either antagonizing the audience or inviting them to participate in general mayhem.

So far, they’ve released four studio albums, as well as mixtapes, their own record label, and even a reality television program called Loiter Squad.

In 2014 Tyler Was Arrested for Inciting A Riot

Even fans sometimes don’t know who’s Tyler the Creator since he sometimes makes strange things. The story was covered by Pitchfork’s Evan Minsker when Tyler instigated a disturbance at a crowded performance by asking individuals who were being held up to just walk past the police and go inside anyhow.

In light of the fact that the place was already full, police were on the scene to ensure that things didn’t go out of control. Tyler’s decision to call people out solely to get the police out of the way was not a wise one.

He Is the Director of His Music Videos

Tyler’s work, in fact, would be impossible to comprehend without the audiovisual component, in which he gives free license to his limitless imagination.

He has developed his own distinctive style that is unmistakable and inextricably linked to his music, which is characterized by a very personal color palette and excellent photographic direction.

He Is Also the Designer of His Album Covers

From the early days of the beginnings of his career to the present day, he has designed every single one of his album covers himself.

In his words, he has mentioned on more than one occasion that graphic design and painting have always been among his favorite hobbies and interests. Therefore, every Tyler the Creator album cover is made by his own hands.

He Has His Clothing Line

Putting out a clothing line as soon as possible is something that most hip hop musicians are renowned for, but Tyler, The Creator’s story is a little different: it all started while he was designing products for Odd Future, which evolved into a desire to produce something more irreverent.

A true streetwear enthusiast (many believe he is responsible for the revival of brands like Supreme by referencing them incessantly in his songs), he brought that street sensibility to his Golf Wang brand and collections, creating pieces that even combined icons of white supremacist groups with LGBTI+ iconography.

Today, he collaborates with brands such as Vans, Converse, and Adidas, and his trainers are in high demand, selling out in minutes.

Since we’ve covered the aspect about who’s Tyler the Creator, now let’s move on and see his top five tracks.

Tyler appears to be chasing after the boy he is drawn to as if he were at a prom or some other type of special event.

In the stage where The Creator speaks about how same-sexual love should never have been stigmatized, this song is appropriate.

When there is a difficulty in a relationship, you might dedicate a song from the IGOR album to it. A lyric intended to convey the message that feelings must be spoken before the earthquake causes widespread harm. Although a little raw, it is objective and to the point.

Tyler, who is accompanied by Kali Uchis, tells us a heartwarming love story. The video is almost like a war movie, in which you hope that the protagonist would be reunited with his beloved again at the end of it.

This may be one of the “rudest” songs to dedicate, but it is nonetheless good for people who are still unsure of how to convey their affections for another person.

The song is taken from his Wolf album and, as a result, it is the most radical song about love, particularly the line ”I fucking hate you (but I love you)”.

The Tyler the Creator boyfriend tune has no need for further explanation. It is a straightforward proclamation of one’s desire to be someone else’s companion, especially when one and the other have far too much in common.

Logically, it became a trigger for many fans to ask themselves is Tyler the Creator gay, and the answer is that he has stated in interviews that he is, although rumor has it that he’s bisexual.

These are the best Tyler the Creator songs, or at least the most famous ones among audiences all across the globe.

Tyler the creator wins Grammy with his talent that comes with his name, and this is a good note that allows people to see him as a great character and someone who deserves to be commended, as he has honestly worked hard and is earning his place in the music industry.

Although he appears to be a little conceited from time to time, this is usual in the entertainment industry, and it is something that we as fans can live with and understand to a certain extent. Now you know who’s Tyler the Creator. Why not start to listen some of the Tyler the Creator albums?