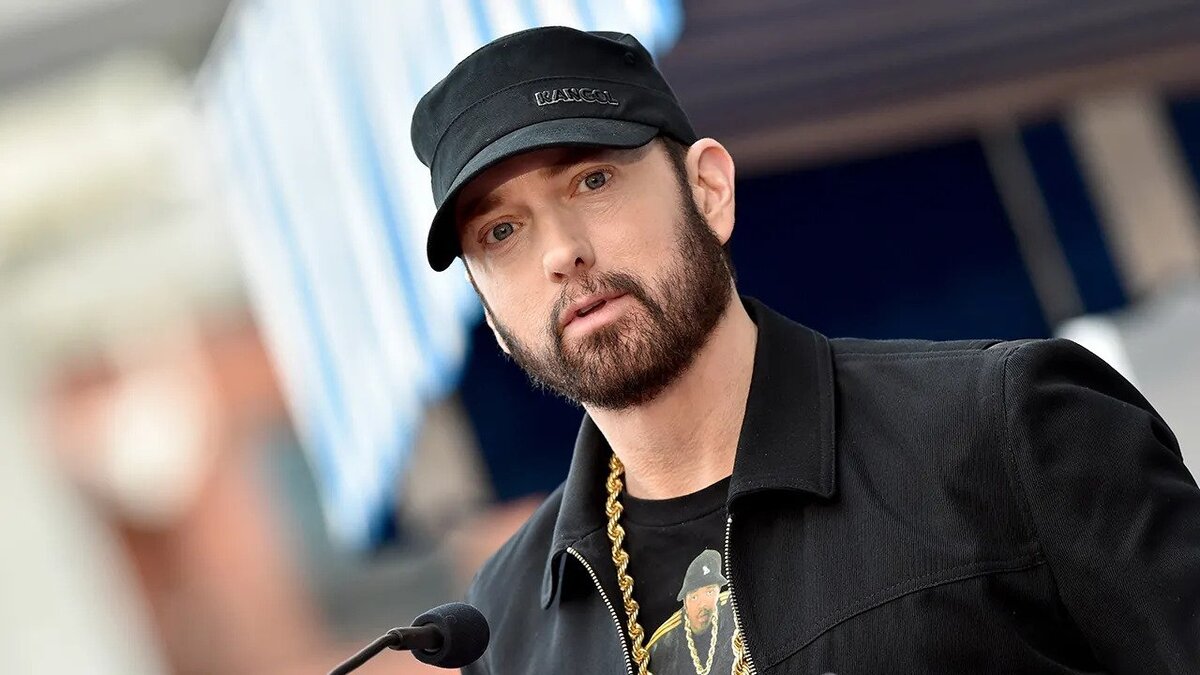 The Comeback of the Rap God: Eminem Teased a New 2022 Music Album?

In the late 90s and early 2000s, Eminem was one of the most promising rising stars on the hip-hop scene. Back then, he was the first white rapper to embrace this music style (even though many claim Everlast was the one who started this trend).

Eminem was a young boy with blonde hair, a specific voice, and filthy language. He enjoyed the so-called black music and wanted to become a part of it. But, the beginnings were not that easy. Many musicians and DJs suggested he try rock n’ roll instead of rap and R&B. But, he was sure he wanted to take part in the global hip-hop scene – and now we know he absolutely did that.

As we know, he sometimes disappears from the scene and doesn’t launch new albums for years. But, we have a few reasons to believe Eminem is getting ready for a huge comeback. Let’s say that his recent appearances tease that he has a lot of new materials to offer to the audience:

Still, there is no announcement for a new album, even though many celebrities already announced their new releasments. But we all hope that it will come soon, together with some promotional USA or world tour. One thing is for sure, if he does that, the Eminem concert ticket price will grow due to the huge interest, and all the shows will be sold-out.

Marshall Mathers III was raised in Detroit and Missouri. His parents were divorced, and his father was not interested in raising him. That was frustrating for the young Marshall (who would later adopt the stage name Eminem), especially when the father was returning the letters he wrote for him.

Eminem realized that rap verses were so relaxing for him because he could express all his emotions and frustrations creatively. His uncle saw the potential and decided to mentor him, but sadly, he took his life, leaving the boy alone.

Later, during the freestyle rap battles, Marshall adopted the name “M&M,” which later became “Eminem.” The underground rap audience loved him, especially his fight to become a rapper, even though it seemed like there was no place for a white boy on the scene.

But, the talent didn’t help him to become a promising rising star. From 1988 to 1997, he suffered many failures, was broke, and had a baby daughter to raise. It was time for a big change, so he adopted Slim Shady, his violent, vulgar, and angry alter ego.

We can say that he did the right thing. Even though his debut album “Infinite” had great songs, he couldn’t promote it successfully, but the second one, the “Slim Shady EP,” was what the audience needed back then. That’s how his success story began, and today, Eminem net worth is estimated to be about $230 million.

The rise of the white rapper

If you are a millennial, you surely remember that your parents were not happy with you listening to brutal rap songs in the early 2000s. But, Eminem was all over the music channels, radio stations, and music shops.

It was unreasonable to admire someone who curses and attacks other people in his songs, but many young adults claim they learned how to manage their anger thanks to Eminem’s songs.

We were all excited to see Eminem dropping new music. And he didn’t fail to surprise us with every new album, song, or music video, even though the TV channels censored some of them.

Everything he did became a huge hit, increasing Eminem net worth over time.

After the successful “Slim Shady EP,” he launched “The Marshall Mathers LP,” featuring the songs “The Way I Am” and “Stan.” Later he released “The Eminem Show,” which opened his path to absolute popularity. It seems like becoming famous resolved many family and personal issues he had. Back then, he had enough money to raise his daughter Hailie, and he was on good terms with his wife, Kim.

It seems like 2002 was a great year for Eminem new music, so he took a step further and released the movie “8 Mile” and the legendary soundtrack song “Lose Yourself.” In 2004 he released the album named “Encore” and the popular song “Just Lose It.”

At the same time, some people hated his angry and insulting lyrics. It somehow led to Eminem’s deserved break for a few years, launching the compilation “Curtain Call” as a goodbye to the audience. But, in 2008, he decided to come back with the album “Relapse,” announcing that there would be “Relapse 2” too. Instead, he released a new album under the name “Recovery.”

Eminem showed another side of his character, proving that he is now a grown-up and serious person with no intentions to insult his scene colleagues again. It seems like he learned his lesson from the lawsuits and legal feuds.

In 2013 he released the album “The Marshall Mathers LP 2”, featuring two collaborations with Rihanna. The next album was named “Shady XV” (music compilation under Shady Records), followed by “Revival,” “Kamikaze,” and the last one from 2020, “Music to Be Murdered.” His first album “Infinite” was remastered and published on his YouTube VEVO channel.

Knowing all these things, we are not really surprised to know his net worth is that big.

Note: Many sources claim that Eminem net worth is about $230 million, but according to Forbes, it’s $630 million after taxes.

As we mentioned at the beginning, Eminem and Snoop Dogg released the track “From The D 2 The LBC”. They even recorded a music video, which made the fans believe he was about to launch a new album soon.

If you follow him on Twitter, you will see he is pretty active, especially with the most recent collaborations with Snoop Dogg, but also the one with CeeLo Green, titled “The King & I” for the “Elvis” movie.

But what made people believe he is absolutely working on his new studio album?

If you watch the video for “From The D 2 The LBC”, you may discover an Easter egg or an Eminem new music 2022 hint.

At 1:33 in the music video, there is a pinball machine displaying the words “Curtain Call 2”. Many fans think this is a teaser for a new album. They are sure the song is an announcement for it. Also, the singer Skylar Grey hinted that a new Em’s album could be coming out in October this year.

Keep in mind that there is no official announcement, and all these things are just speculations and unconfirmed claims. But, we can’t deny the fact that Eminem has been so active since the NFL Halftime show, releasing two collaboration songs after that.

Also, we have to note that the new edition of “The Eminem Show (20th Anniversary Expanded Edition) is available on the streaming platforms only. It’s expected to be released in physical edition later this year, including a vinyl set, CD, and cassette.

What can we expect for “Curtain Call 2”?

The first compilation, titled “Curtain Call,” was released before Eminem’s break back in 2005. The album featured extended and uncensored versions of his popular songs, four new songs, and the live version of “Stan” with Elton John.

“Curtain Call 2” is not officially announced, but fans are sure there will be explicit versions of the songs released from 2008 until today. There is nothing official on this, but one thing is for sure – Eminem net worth 2022 will be bigger than ever, no matter if he releases the compilation or a completely new studio album.

Or, maybe, he has completely new things to show us.

The fans can’t wait for Eminem’s new album to be confirmed.

Will Eminem get back to some of his bands?

Em was a part of a few rap and hip-hop music groups. We recognize him as a part of D12, Bad Meets Evil, Outsidaz, and Soul Intent.

All of them are not active at the moment, and it seems like these stories are completely over.

Until 2018, people thought D12 could still get back after the death of Proof in 2006. But when Eminem released the album “Kamikaze,” he announced in the song “Stepping Stone” that the D12 story was officially over, and they disbanded.

The lyrical feuds with other music stars

Eminem was known to diss his stage colleagues, insulting them in his lyrics. That brought some lawsuits and lyrical feuds with Christina Aguilera, Will Smith, Mariah Carey, and Nick Cannon, but also Fred Durst from Limp Bizkit, then Everlast, Machine Gun Kelly, Vanilla Ice, Ja Rule, etc.

Also, he dissed his wife, Kim, with the song “Kim,” where he fantasizes about how he killed her. His mother, Debbie, also filed a lawsuit because he insulted her in a song.

Seems like he had a lot of frustration to address, but now, all those things are behind the rapper, as new Eminem music is being released, with no signs of anger issues in the lyrics.

The legacy of Eminem, Slim Shady, Marshall, and Ken Kaniff

We can’t deny that Eminem had a huge influence over the white boys who wanted to embrace a career in the rap scene. From the moment he appeared on the stage, it was clear he would make history. The whole hip-hop genre completely changed, and Eminem’s influence helped many rising and promising stars to find their place on the scene.

Also, he encourages the artists to openly write and sing about their personal problems because it’s a kind of therapy. Many people still think Eminem is overrated because he is white, different, filthy, and vulgar.

But, no one can deny the fact that he introduced rap music to the audience, showing that it’s music for the masses, not just for the suburbs and ghettos.

Eminem finally settled, calming down the alter egos he used in the songs.

As Eminem is now almost 50 years old, it was time for Slim Shady to step off during the “Recovery” production because he is childish and doesn’t fit the new materials. Ken Kaniff is nowhere to be seen in the recent albums. He was a guy who was making fun of Eminem songs, and many believed it was a form of self-criticism.

And of course, Marshall is the person when he is with his family and friends before he takes the stage and becomes Eminem.

We can indeed see how he was growing up as an artist, but also as a person.

You can love, hate, or be completely unaffected by his influence. But, we can’t deny the fact that he made history, bringing rap music closer to the masses. Every one of his personalities had a role in that.

Eminem is still a big name on the hip-hop scene. During all the inactive periods, he had fans who were patiently waiting for him to drop some new music.

The NFL Halftime show and the recent singles are proof he is still active and has a lot of new things to offer to his audience.

Hopefully, there won’t be any new lawsuits and feuds, knowing that he is a grown man and established artist who is praised by many music legends.

No matter what he prepares for the public, we are sure Eminem net worth will still be huge next year, and no one can take that away from him.