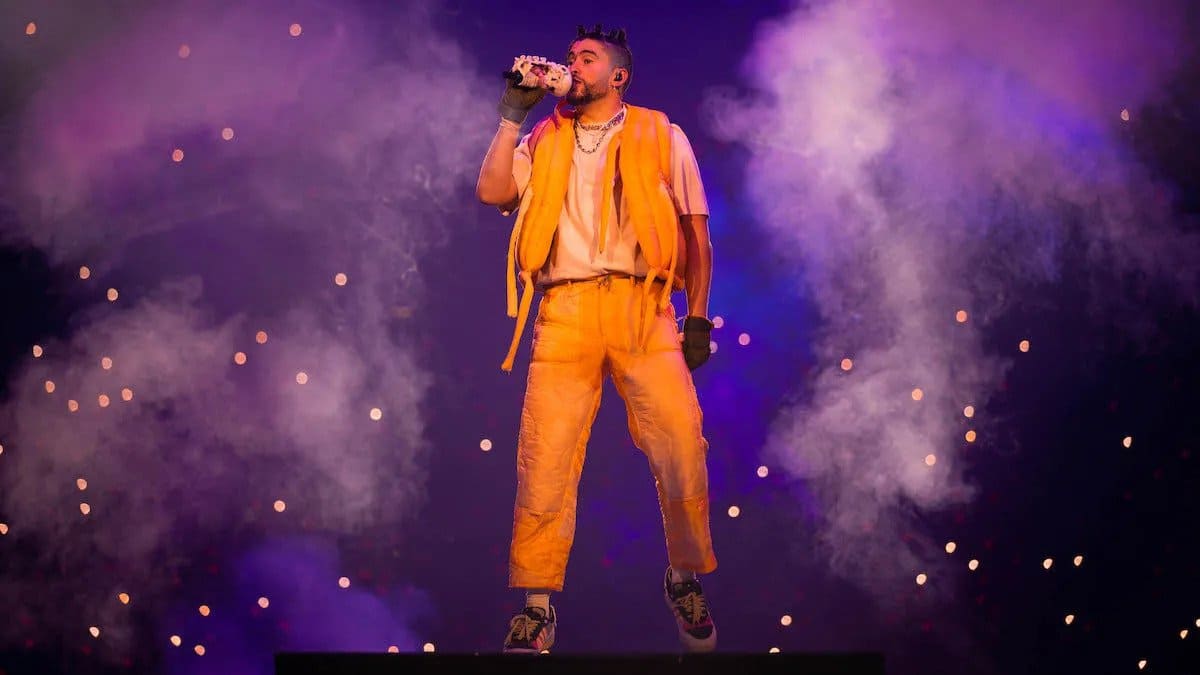 Benito Antonio Martinez Ocasio is known for his stage name Bad Bunny. He comes from Puerto Rico and adopts the sounds of trap, reggaeton, and Latino music in his style. Also, he mixes it up with some rock, punk, and soul, resulting in exceptional music pieces that the audience love.

But how did he become so popular? Who was his inspiration? Who is Benito today, and what are the top Bad Bunny songs we all love?

Let’s find out in this article.

How Did Bad Bunny Get His Stage Name?

Benito had a photo of himself as a child, wearing a bunny suit, with a grumpy face expression. That particular photo was an inspiration for his stage name.

And now, that child in a bunny suit is rocking all around the world, with many concerts sold-out as they are announced.

Bad Bunny has scheduled more than 20 live shows for the next two months. He had some more concerts earlier this year, and we can say that the audience went crazy for his performance.

Maybe he didn’t even think he would become the world’s hottest artist for 2022 when the photo was taken, but we are sure that the bunny suit promised a lot of luck and success for the child named Benito.

Early Career and the Beginnings

The young Bad Bunny was interested in different artists, but he was mostly hooked on Daddy Yankee, Juanes, and Hector Lavoe. He even sang Juanes’s song on a talent show, as he later decided to focus more on Latino rap and reggae to express his musical talents.

Bad Bunny released his first interpretations on SoundCloud, starting from 2013 to 2016. He was working in a supermarket to earn money, but he got lucky in 2016 when his song “Diles” attracted a lot of attention on SoundCloud. So, DJ Luian recognized his talent and introduced Bad Bunny to the Mambo Kingz Production.

And after a few exceptional hot Latino songs, finally, Benito got his deserved attention and popularity.

After that, we got his hottest hits, including “Soy Peor,” “Krippy Kush,” and “Ahora Me Llama,” but after the collaboration with Cardi B and J Balvin for the song “I Like It,” things went even better for him. In 2018 he was also nominated for a Grammy and had many other significant collaborations, including those with Drake and Jennifer Lopez. The whole thing culminated with his Coachella performance in 2019, ensuring he is one of the most promising Gen Z idols of today. This eventually resulted in Bad Bunny ticket price going up, as his live shows are in high demand in the USA and Canada.

Bad Bunny is a popular solo artist but also collaborates with many popular music stars throughout his career.

All these collaborations resulted in successful songs that the audience loves.

And who knows, maybe some of these stars will appear during his concerts and live performances soon.

If you stream his music on Spotify, or he is a part of your summer playlists, you can surely tell that all Bad Bunny popular songs are meant to be huge, with millions of YouTube views and Spotify streams.

He has released 93 singles, including 44 as the main artist and 48 as a featured collaborator. And that’s a pretty huge accomplishment for a short period, knowing that everything Bad Bunny releases becomes a hit among the audience.

Earlier this year, he released the album “Un Verano Sin Ti,” and he is halfway through his USA and Canadian tour.

The songs from the last album get all the attention worldwide, but the audience also loves the old singles and collaborations, like “No Me Conoce,” “Tu No Metes Cabra,” “La Noche De Anoche,” “Yonaguni,” etc. Usually, he sings all the best Bad Bunny songs on live shows, which the audience adore.

Bad Bunny always keeps a conversational tone in the lyrics, which sometimes can be even vile or childish, but it gives the songs a unique expression. He is so passionate about doing this, no matter if he sings for the girls to dance around him or if he is angry and heartbroken. Sometimes he expresses some specific references on different topics, including self-love, inclusivity, culture, etc.

Those who understand Spanish can address some sexual elements in the lyrics of Bad Bunny songs, especially “Yo Perreo Sola.” Others that don’t speak Spanish simply dance to the rhythm without paying much attention to what he sings. But, all the fans can say his music, as a combination of styles, energy, lyrics, and expression, is really empowering and lifts the spirits up.

Bad Bunny is also known for his humanitarian activism, and he also helps the poor children in Puerto Rico through his Good Bunny Foundation. He also supports the LGBT community but fights against domestic and gender-based violence.

Additionally, our favorite Benito is a loud wrestling fan, and he passionately trains with experienced wrestlers too.

It’s worth mentioning that he also has some acting aspirations, appearing in the movie “F9,” which is a sequel to “The Fate of the Furious” from 2017. It’s a part of the “Fast & Furious” franchise, and he worked with Vin Diesel, John Cena, Michelle Rodriguez, and many other stars from the series.

We also expect to see him in “Bullet Train” later in August, together with Brad Pitt and Sandra Bullock.

Another movie project is announced for 2024, titled “El Muerto.” Bad Bunny will take the role of El Muerto, who is a Spider-Man-related character. It’s expected that the movie will be released in January 2024.

The Best Bad Bunny Songs for Your Playlist

As we said, Bad Bunny has worked on more than 90 songs as a main or featured artist. Some of his songs are funny and catchy, and others are emotional and powerful. But, the biggest among them all are:

“Ignorantes” is from the YHLQMDLG album. Bad Bunny sings about the former love he is sorry to let go of. We started this list with an emotional song to prove that he can sing about love, breakup, and emotions. It’s a slow summer jam that can encourage you not to let your love go.

“Safaera” is about enjoying the life you live currently and being proud of everything you do. In the music video, he is a criminal proud of his lifestyle, but the rhythm is what get you hooked and makes you dance. It’s one of the most popular Bad Bunny songs of all time.

This song was released in 2019. Bad Bunny sings about a girl who wants to party but hides a huge secret. She is quite the opposite, quiet and introverted, and she indeed cares what the people think about her.

This is a Latino dance anthem for all the girls and women who want to dance alone on the dancefloor. And surely, when you listen to this song, you will literally want to dance. Or we can say twerk because the term “perreo” refers to twerking.

This is one of the songs dedicated to all the women who are in toxic relationships and victims of their violent partners. The actress Laura Chimaras appears as the main character in the video, encouraging the girls to love themselves.

“La Dificil” is a flirty song for a girl that is playing hard to get. She had a bad breakup, and she doesn’t want a relationship right now. This is a pretty common situation nowadays, so many fans love this song because they recognize the story in the lyrics.

This is a song for all those ex-partners who think they are entitled to a second chance after a breakup. It’s also about those who think it’s completely fine to disturb their former partners in the middle of the night or a few months after a breakup, knowing they can still squeeze out some emotions.

Bad Bunny’s message for the fans is not to fall for games like this and to keep their dignity by blocking the entitled ex.

This is a multi-layered song with a few genres included. But it’s also one of the Latin hit songs that reached Billboard’s global and US charts. One thing is for sure, and the audience will dance passionately from the opening notes until the end of the track.

This is a simple title that means “Mine.” Bad Bunny collaborated with Drake on this track, and it’s one of the songs that helped him become a mainstream and widely recognized artist. The vibe will never go out of style, and it’s still one of the hottest dance bangers in the clubs.

“Te Guste” is a duet with Jennifer Lopez, and we can say that their voices and music styles work so well together. We expect many further collaborations after this.

It’s a catchy song for young people who fall in love at first sight, and Jennifer Lopez literally slew this one, since she doesn’t sing a lot in Spanish.

What songs will Bad Bunny sing in concert in 2022?

Bad Bunny songs are huge hits, but we expect that he will be focused on promoting his most recent album, “Un Verano Sin Ti,” during the USA and Canadian tour. In 2022, he mostly sang “Hoy Cobre,” “Yo Visto Asi,” “Te Deseo Lo Mejor,” “Safarea,” “La Dificil,” and many other hit songs.

The concert lineups are not known to the public because Bad Bunny wants to surprise the audience all the time.

Most of the live shows last up to three hours, but he has a lot of materials to fit in, together with the collaborations, opening acts, and the whole program predicted with his plans. Surely, the situation can change, and he can choose a different schedule depending on the conditions.

And when it comes to the newest album, we hope that we will listen to “Me Porto Bonito,” “Moscow Mule,” “Titi Me Pregunto,” “Ojitos Lindos,” and “Despues de la Playa” on his next gig.

Bad Bunny released 23 new songs for “Un Verano Sin Ti.” Right now, there is no official announcement for a new album later this year or in 2023. But, we can never know.

He is a widely loved and anticipated artist, and most of the scheduled shows are sold out. So, if you want to attend some of his further events, we suggest you hurry up and book your tickets on time.

Who is Bad Bunny in Private?

Being aware of his talents, Bad Bunny knew that he needed to handle huge popularity once he became a star. But, his fans are not really satisfied with his decision to leave right after the gig to avoid crowds.

Even though he is an energetic performer, he prefers a calm life. That’s why he doesn’t expose his relationship with the talented jewelry designer Gabriela Berlingeri. She is also a singer and photographer and was popular enough before she even met Bad Bunny.

They have been together since 2017 but announced their relationship in 2020. She even appeared in the video “Titi Me Pregunto” as his bride, but as far as we know, they are still not married.

Bad Bunny is not just a talented and exceptional performer. He is also loyal to Berlingeri, confirming that they are happy together, and she was his biggest support when the times got hard or he was tired of his popularity.

Everything he does is impressive and special. That’s the reason why Bad Bunny has so many loyal fans all around the world, even among those who don’t speak Spanish at all.