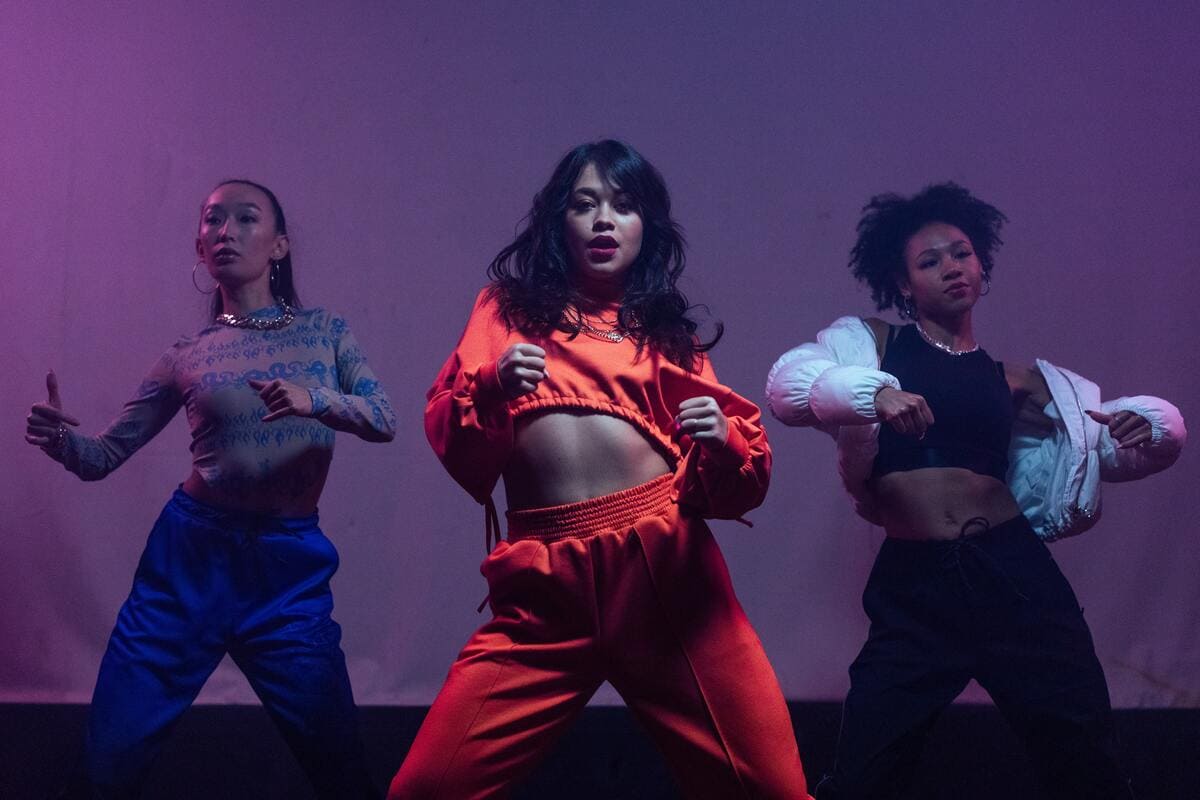 10 Female Rappers You Should See Perform Live in 2023

2023 is finally here, so it’s time to plan for which live concerts you will attend in the upcoming months. There are many fantastic concerts and music festivals this year from many different performers and genres.

One genre that’s excellent for boosting your energy at the beginning of 2023 is rap and hip-hop. And female rappers are a perfect option for having fun with your friends since women have taken the rap music scene by storm.

Therefore, let’s see the best female rappers you should see perform live this 2023.

One of the top female rappers you should see perform live in 2023 is Little Simz; since she is a multi-talent that’s also an actress, so her live performances are more than entertaining.

Her real name is Simbiatu “Simbi” Abisola Abiola Ajikawo, and she’s a British rapper who rose to prominence with an independent release of three albums, A Curious Tale of Trials + Persons (2015), Stillness in Wonderland (2016) and Grey Area (2019). Little Simz has two other studio albums, Sometimes I Might Be Introvert (2021) and No Thank You (2022). She is already a success since Grey Area was shortlisted for the Mercury Prize and won Best Album at the NME Awards and the Ivor Novello Awards. Also, Sometimes I Might Be Introvert won Best Hip-Hop/Rap Record at the Libera Awards, Album of the Year at the Mercury Prize, and Album of the Year at the MOBO Awards.

Considering her musical success, Little Simz deserves to be known as one of the best female rappers of today.

When it comes to female rappers 2000s, Lizzo is most certainly at the top of the game. She’s also a singer and a flutist, yes, you read that right, so Lizzo’s live concerts are worth attending.

Lizzo also had challenges along the way before signing with Atlantic Records and Nice Life Recording Company; she released two studio albums, Lizzobangers in 2013 and Big Grrrl World in 2015. Her first major-label EP was released back in 2016 by the name of Coconut Oil. Lizzo’s mainstream success finally became a reality in 2019 with the release of her third studio album, Cuz I Love You. After working hard for years, success was finally right at her door since this album peaked at number four on the prestigious Billboard 200.

If you want to enjoy a concert where multiple subgenres of rap music are present, it’s best to attend Latto live concerts since she mixes hip-hop, trap, Southern hip-hop, and pop rap.

Latto is relatively new to the rap music scene, but she already has two studio albums, Queen of da Souf (2020) and 777 (2022). One of the main reasons why Latto is on this list of best female rappers you should see perform live in 2023 is because, with only two studio albums, she has already won multiple music awards. Some of them include Best New Artist at the BET Awards, New Artist of The Year at the People’s Choice Awards, Song of the Year at BET Hip Hop Awards for her song Big Energy, and the Youth Hip Hop/R&B Award at the Georgia Music Awards.

Latto and Lizzo have many live concerts in the upcoming months, so now is the perfect time to buy tickets for their shows.

If you are looking for new female rappers, then you should definitely check out GloRilla since at only 23 years of age, she was nominated for Best Rap Performance at the 65th Annual Grammy Awards for her track F.N.F. (Let’s Go) with Hitkidd. In addition, she made it to the top ten on the Billboard Hot 100 with her single Tomorrow 2, which features rap superstar Cardi B.

GloRilla has also made music collaborations with Latto and JT from City Girls, so her future is undoubtedly bright. As you can see, two things are for sure in the rap music industry – excellent female performers are taking over the scene quickly, and there’s no need to worry about the future of rap music.

There’s no doubt that Doja Cat is one of the best female rappers considering her rapid success with gold and double platinum certificates for her three studio albums. Her first studio album, Amala, sold 500,000 copies in the US, while her second and third, Hot Pink and Planet Her, both got double platinum RIAA certifications.

Buying Doja Cat tickets isn’t just a passage to a beautiful live concert; it’s also an entire musical experience since Doja is known for her absurdly funny personality, online presence, and eccentric dressing style. Considering her stage name, many of her fashionable choices include cat-like dresses and animal-crossing costumes.

As for music awards, the LA-born superstar has won one Grammy Award from 16 nominations, three MTV Video Music Awards, five American Music Awards, and five Billboard Music Awards. Rap music fans and critics often make a Doja Cat with Megan Thee Stallion comparison since they have a similar music style and are the same age, but it’s nice to attend both their live concerts since they have different stage presence.

Trina was a refreshment for all 90s female rappers since she began her career in 1998 and was a breath of fresh air in the hip-hop music scene.

Her first studio album, Da Baddest Bitch, was released on March 21st, 2000, and it got a gold RIAA certification. As of 2007, this album has had more than 683,000 sales only in the USA. Trina’s second studio album, Diamond Princess, released in 2002, was also a success with now over 501,000 sales in the US, so she definitely made the 90s scene better and made a fantastic entrance in the 2000s.

Another significant reason why attending a Trina live concert is worth your time is because she was described as the most consistent female rapper of all time by XXL, the American hip-hop magazine. Furthermore, this Miami-born performer was part of the 31 Female Rappers Who Changed Hip-Hop list made by Billboard in 2014, while in 2013, the American media and entertainment company for youth culture, Complex, ranked Trina’s single Pull Over at number 27 in their Top 50 Best Rap Songs by Women.

Even though only 32 years old, Iggy Azalea is already one of the best female rappers of all time. The Australian-born superstar has an impressive list of 40 music award wins from 132 nominations in almost any music award you can imagine.

What makes her rap career even more impressive is that she has excellent success with only three studio albums, The New Classic (2014), In My Defense (2019), and The End of an Era (2021). Iggy Azalea’s debut studio album sold over 1 million copies only in the United States and got a platinum RIAA certification. Also, it peaked at number two on Australian Albums and number 1 on Australian Urban Albums, UK R&B Albums, US Top R&B/Hip-Hop Albums, and US Top Rap Albums.

With her authentic live performances, Azalea has won the hearts of millions of rap music fans. Therefore, it’s not surprising that she has won three Billboard Music Awards, two American Music Awards, one People’s Choice Award, and MTV Video Music Award, and has had four Grammy Award nominations. Also, Iggy’s YouTube channel has around 3.4 billion views, while 15 of her music videos have more than 100 million views on Vevo.

One of the most talked-about upcoming events is the Pitbull and Iggy Azalea concert on March 20th, 2023, at the Hertz Arena in Estero, Florida, so if you want to attend this live spectacle, now is the time to buy tickets!

This Texas-born female rapper has already said she isn’t planning to take a break at this time, so her worldwide fans barely wait for the 2023 tour to listen to all the Megan Thee Stallion new album tracks. It’s Megan’s second album, which had its release on August 12th, 2022, by the name of Traumazine, while her debut album, Good News, sold over 1 million copies and peaked at number one on Billboard’s US Top R&B/Hip-Hop Albums.

Megan Thee Stallion is a charismatic live performer who got the attention of rap fans via her freestyling videos on social media channels. She had the talent to become a professional rapper when she made a deal with 300 Entertainment in 2018 and made a release of her mixtape Fever in 2019. A year later, the release of the Suga EP came along, and both Fever and Suga found their place in the top ten on Billboard 200.

Today, she is one of the most famous female rappers in the world, so it’s not surprising that Megan Thee Stallion tickets sell out in a matter of minutes. At only 27 years of age, Megan has won four American Music Awards, six BET Awards, five BET Hip Hop Awards, three Grammys, two MTV VMAs, and a Billboard Women in Music Award.

Another fascinating fact is that Megan became the second female rapper to win Best New Artist after the legendary Lauryn Hill in 1999. This moment was a true honor since Lauryn Hill is one of the 80s female rappers that took rap music to another level in the 90s.

Furthermore, Megan concentrated on her education and graduated from Texas Southern University with a Bachelor of Science in Health Administration in 2021. The prestigious Time magazine named Megan Thee Stallion as one of the 100 most influential people worldwide on their annual list back in 2020.

Kash Doll is yet another performer that deserves to be on this best female rappers list. The reason is that even though she still doesn’t have as successful a rap career as all other performers on this list, she is definitely on the rise since her 2019 studio album Stacked.

It’s her debut album that sold around 8,600 units in its first week of release in the United States, while it debuted at number 76 on Billboard 200 and peaked at number 14 on Billboard’s Rap Album Sales. Her album features guest appearances from famous musicians such as Lil Wayne, Big Sean, Trey Songz, Teyana Taylor, etc.

Kash’s single Ice Me Out was remixed by 2 Chainz, while her other famous tracks include Ready Set, Kitten, and others.

Last on the list, but equally fascinating, is one of the leading female rappers 90s, Mc Lyte. She is also a songwriter, record producer, actress, director, writer, entrepreneur, motivational speaker, DJ, and voiceover artist, all in all, a multi-talent with various occupations.

However, her number one love is rap music, and at age 52, MC Lyte is rocking stages all across the globe, better than many young female rappers.

The New York City-born rapper has eight studio albums, two Grammy Award nominations, and two Billboard Music Award nominations, among other accolades, while also won the Best R&B/Soul or Rap Music Video award at the Soul Train Lady of Soul Awards for her track Keep On, Keepin’ On featuring Xscape.

Considered one of the pioneers of female rap, MC Lyte was honored at the VH1 Hip-Hop Honors and received the I Am Hip Hop Icon Lifetime Achievement from the BET Hip-Hop Awards.

Most of these performers are already considered the best rappers of our time, while others are right in front of the door and will climb to the top extremely fast. Be as it may, you should see some of these great female rappers perform live in 2023 since the future of rap music is in their hands.

So, make sure to call your best friends as soon as possible to buy concert tickets since they sell out pretty fast for these rappers, especially now since the season of live concerts is in front of us and everyone is trying to get the cheapest concert tickets.

We wish you all the best this year, and don’t forget to have a lot of fun!